Making a Plan for Smooth Retirement, Regardless of Bumps in the Road

After being married for over 30 years, Tanya and John had settled into a routine when it came to money management. John depended on Tanya to manage the family finances, and Tanya handled them out of necessity.

The one-sided arrangement worked sometimes. Other times, it did not. Like when major purchasing decisions popped up.John would encourage big purchases like a car, or an addition to the house, and Tanya would say they didn’t have the money. Then they would fight about it until Tanya could figure out a way to crunch the numbers and make it work.

Needless to say, Tanya didn’t always feel comfortable with the compromises and worried about the impact these purchases would have on their ability to retire comfortably.

When Tanya and John argued about money, she felt like the “money police.” It wasn’t fun and was hurting their marriage. And, the arguments worsened when John decided he wanted to retire.

Tanya felt added pressure, not only because she needed to manage the family finances, but also because roles had changed and now Tanya was the only one working while John was staying at home.

“I didn’t want to deal with the burden of making sure we had enough money for the rest of our lives,” Tanya said, “Our discussions would turn into fights, and he would say things like ‘We are so broke, I will never be able to retire’ or ‘My mom lived on Social Security and did fine’ or ‘so and so retired at fifty-five and they are fine.’”

The pressures of the arguments took their toll and Tanya and John began taking steps that would allow John to retire.

At 59 years old — and after only six months of her husband in retirement — Tanya was laid off after 23 years of service to her company.

The sudden upheaval left Tanya feeling immense financial anxiety. They had just signed a contract to have their kitchen remodeled, had a car payment, and tacked on a few other bills.

Each day became an emotional roller coaster as Tanya searched for a new job. She completed numerous applications online but felt paralyzed by the drastic changes job hunting had taken over the last two decades. At the same time, John was having trouble adjusting to his new life as a retiree.

Tanya toyed with the idea of early retirement for herself, but was worried it wouldn’t work with their personal retirement plan, “What if we didn’t have enough money to last us the rest of our lives? What if we got sick? The fear of the unknown was overwhelming.”

Tanya knew they needed professional help to understand their current situation, and what they needed to protect their financial future.

Getting Their Financial House in Order 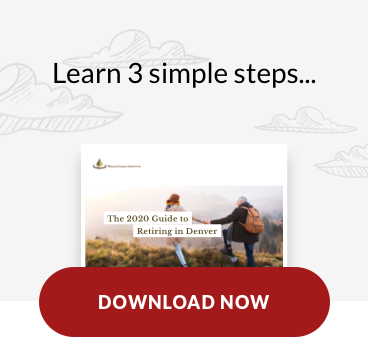 After feeling overwhelmed and stressed from having their personal retirement plan rest on her shoulders, Tanya started researching financial advisors.

The first pair of advisors Tanya and John met with were not the fit they were looking for. After exchanging niceties with the husband and wife advisor duo— like an in-depth conversation about Corvettes between the male advisor and John — and a quick rundown of hypothetical situations from the female advisor directed at Tanya, the advisors told the couple they were good to go, Tanya could retire, and everything would be fine. And, the financial advisor duo would continue the relationship managing their retirement investment plan only.

With Tanya’s background in the financial services industry the brief, surface-level interaction didn’t feel right. Tanya wanted an advisor with zero conflicts of interest (like product sales, commissions, or incentive kickbacks) and, equally important, wanted someone who could engage John in meaningful conversations about money and retirement.

She needed a financial advisor in Denver that would remove the burden and help them approach finances as a team.

Tanya continued her search for a wealth advisor but refined it to look for a financial fiduciary who was also a Certified Financial Planner ® (CFP).

During the course of her research, she found an article in The Denver Post titled, “Find a fiduciary who will act in your best interest” which introduced her to Wealth Legacy Institute, a Denver wealth management firm. She then read Money Secrets: Keys to Smart Investing, written by Wealth Legacy Institute’s founder Kim Curtis, and was impressed.

Tanya called to arrange a consultation appointment. After the initial meeting where Tanya and John learned about the Planning for LIFE Experience™, they decided to move forward with Wealth Legacy Institute to help make their personal retirement plan work.

Over the course of the onboarding process, Wealth Legacy Institute was able to engage John and Tanya by communicating in a way that both of them understood. John was given tasks to complete prior to each meeting, and for the first time, John was participating in the process.

Tanya felt she was finally beginning to understand the burden she felt managing their finances.

Overcoming the Bumps for a Smooth Future Ride

By working through the Planning for LIFE Experience™, and with collaborative planning, Wealth Legacy Institute determined a monthly spending amount that met Tanya and John’s needs, wants, and expenses and would last through retirement.

Tanya and John also received help reimagining their retirement tax planning and organizing their accounts so they could manage all the aspects of their financial life in one simple way. Wealth Legacy Institute helped Tanya and John consolidate their investments and create an investment policy statement consistent with their risk tolerance and capacity based on the financial plan. And, for the first time in years, Tanya felt a huge sigh of relief — things were going to be okay.

Not only did the couple feel secure, but they were also relieved that they could live within their constructed budget and still have fun.

“Wealth Legacy Institute helped me ease into the mindset of spending from our retirement accounts instead of saving within them. I had to let go of the financial worry. I felt confident that we were getting the best guidance,” said Tanya, “Peace of mind, financially speaking, is priceless.”

You too can have peace of mind. And, Wealth Legacy Institute wants to help. Contact one of our fiduciary advisors to create your own personal retirement plan that sets you on the path toward a comfortable retirement.

“Snowbird” is a word most people aren’t familiar with, but it’s quite popular among retirees. As temperatures dip throughout the U.S, many seniors lea...

Just as millions of seniors rely on Social Security for income in retirement, Medicare is another important program for older Americans. As you approa...

Many people believe that all they need for a successful retirement is earning their nest egg. But that is very far from reality. While having enough m...